Canadian public interest The National Energy Board (NEB or Board) finds that the Trans Mountain Expansion Project (Project) is in Canada’s public interest, and recommends the Governor in Council (GIC) approve the Project and direct the Board to issue the necessary Certificate of Public Convenience and Necessity (CPCN) and amended CPCNs. Should the GIC approve the Project, the associated regulatory instruments (Instruments) issued by the Board would come into effect. 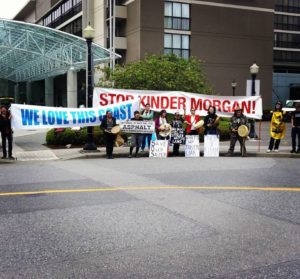 Should the GIC approve the Project, the Board considers it necessary that the CPCNs and Instruments be subject to 157 conditions.2 These conditions would address issues such as safety, protection of the environment and other considerations that are identified throughout this NEB Report.

To set the context for its recommendation, the overarching consideration for the Board’s public interest determination was: can this Project be constructed, operated and maintained in a safe manner. The Board found the Project would meet this threshold.

While this initial consideration was fundamental to the Board’s determination, a finding that a pipeline can be constructed, operated and maintained in a safe manner does not mean it is necessarily in the public interest – there are other considerations that the Board must weigh in coming to its public interest determination, as discussed below. However, the analysis would go no further if this fundamental question were to be answered in the negative; an unsafe pipeline can never be in the public interest.

If constructed, the Project would approximately triple the capacity of the Trans Mountain Pipeline system in Western Canada. Together, the current and expanded pipeline would ship oil from Edmonton, Alberta, to Burnaby, British Columbia. At that point, oil would be loaded on to tankers at the Westridge Marine Terminal (WMT) for export to Washington State, California and Asia.

A full description of the Project is provided in Chapter 1 of the NEB Report, but it is important to note that marine shipping beyond the WMT is not part of the Project and is not within the Board’s regulatory jurisdiction. Other governmental departments and agencies are charged with those responsibilities.

Link to read the report